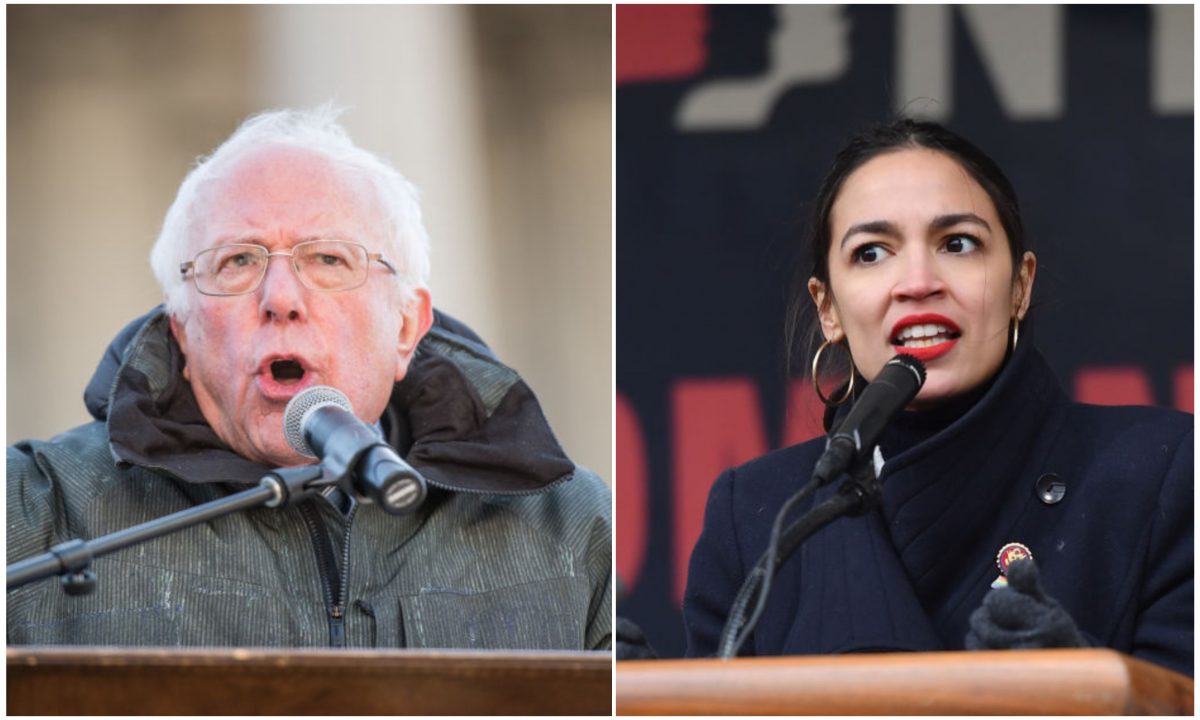 The World Economic Forum in Davos, Switzerland, is underway this week, with thousands of global business and political leaders in attendance. It was reported by CNBC that the “elite financiers attending the World Economic Forum are worried about the 70 percent tax rate on earnings above $10 million proposed by freshman Rep. Alexandria Ocasio-Cortez (D-N.Y.)”

Rest assured, the global financial elite don’t fear Ocasio-Cortez one iota. They do, however, have concerns about the power to destroy the global economy being wielded by people so completely inept on issues concerning fiscal policy as Ocasio-Cortez and Sen. Bernie Sanders (I-Vt.).

CNBC reported that Ocasio-Cortez said “’a system that allows billionaires to exist’ is immoral” and that it’s wrong that billionaires can exist alongside “parts of Alabama where people are still getting ringworm because they don’t have access to public health.”

The point these “Democratic Socialists” and their well-meaning, but ill-advised, supporters don’t realize is that wealth and income aren’t zero-sum games.

The rich aren’t rich because they’ve stolen from the poor. The rich created wealth by, a) engaging in voluntary commerce with a customer base willing to pay a mutually agreed-upon price in a free exchange, and, b) taking their profits and making capital investments, which yield returns.

“In 1997, J.K. Rowling published the first book in her Harry Potter series. Over the course of the next decade, she published six more Harry Potter books. Millions of delighted readers willingly paid about $10 to $20 for each one, making Rowling a billionaire,” wrote Don Watkins and Yaron Brook in a book called “Equal is Unfair: America’s Misguided Fight Against Income Inequality.”

“Because millions of individuals chose to pay $20 for a copy of one of her books, inequality increased: her income and wealth rose, her fans’ incomes didn’t budge and their wealth fell [by the cost of her book]. But the result was that everyone involved in these transactions was better off.”

Many, in the name of social justice, push for equal outcomes. Currently, some want more equal outcomes in wealth. But, when it comes to wealth (just like in any other area), guaranteeing an equal outcome is impossible.

There are too many variables in life. Some people work harder, some people are smarter, some people make better investments, some people chronically mismanage funds. So, we can never expect to see equal outcomes in wealth across groups. And, as we saw in the example above, Rowling had a wealth disparity with many of her fans. Yet because that disparity was created through a voluntary exchange, where all parties gained something of value, it’s clear that there can be great wealth disparities without the presence of injustice.

Inequality does not equal inequity. It may not be vogue, but it is the truth. One more time for the people in the back—INEQUALITY DOES NOT EQUAL INEQUITY!

It’s not immoral to create a product or service that millions of people choose to buy. Immorality lies in taking wealth and income away from someone who has earned it and redistributing it to someone who hasn’t.

This is precisely what Ocasio-Cortez and Sanders are proposing: confiscatory tax rates to steal money that they haven’t earned and dole it out however they see fit, under the guise of social justice. But, there’s nothing moral or just about this plan. It’s government-sanctioned theft.

The idea that the progressive tax system we currently have is unfair is rooted in envy and is being exploited in an attempt to fund impossible-to-fund projects proposed by the left. Just a few weeks ago, Ocasio-Cortez was interviewed by Anderson Cooper on “60 Minutes” and attempted to justify a 70 percent tax rate by saying, “people are going to have to start paying their fair share.”

This hackneyed idea is based on several underlying assumptions. First, that people will actually pay a 70 percent tax rate.

Oft-cited by proponents of this plan is the fact that in the 1950s, the U.S. had a tax rate near 70 percent. What they leave out is that no one actually “paid” that tax rate. As it turns out, rich people have tax attorneys and accountants who are very good at finding deductions and exemptions. When overtaxed, they make much of their income non-taxable through creative legal remedies, which is why higher tax rates tend to produce lower tax revenue. We should expect the same today.

Second, the notion of “fair” is entirely subjective. The Wall Street Journal reported that in 2018, the top 20 percent of earners paid a whopping 87 percent of income taxes. That doesn’t look very fair. The progressive tax system we already have is biased in favor of lower income earners. Yet, to a fiscally illiterate member of Congress, such nuances are simply to be ignored.

Imposing tax rates (at any income level) of 50 percent or more are indeed confiscatory, and the impact will be stunted economic growth, fewer jobs, and reduced opportunities for the very Americans those policies are said to help. Even if the government attempts to impose restrictions on deductions and exemptions, the mega-wealthy have enough assets to simply pick up and move. It’s not a stretch to assume they will take their businesses with them.

That means the people working for those companies would then make nothing, because they’ll be unemployed.

The other factor in these short-sighted proposals is that much of the wealth created by the ultra-rich comes from capital gains, not wage/salary income.

In 2015, Robert Frank of CNBC cited data from the Tax Policy Center and found that, for those making $10 million or more (the group Ocasio-Cortez called the “tippy-top” of earners, subject to her proposed 70 percent tax rate), wages and salaries comprise only 15 percent of their income.

“Their real money comes from capital gains, with capital gains accounting for about half of their earnings,” Frank said. “Another 15 percent to 20 percent came from interest and dividends. About 25 percent of their income came from business income, which means they owned or held a stake in a private company.”

One can understand the place of empathy behind proposals for increased tax rates to fund social programs. But, if you truly want to help the poor, then just help the poor. Nothing is stopping you as an individual from writing a check out of your own bank account or volunteering. Churches and private organizations have been helping the poor for years.

But, nothing should make any of us feel good about advocating the use of force to take money away from the most productive people in our society to simply hand it over to the least productive. Not only will that plan not work, but it’s also inherently unfair.

0 comments on “The War on Success: The Wealthy and Their ‘Fair Share’”