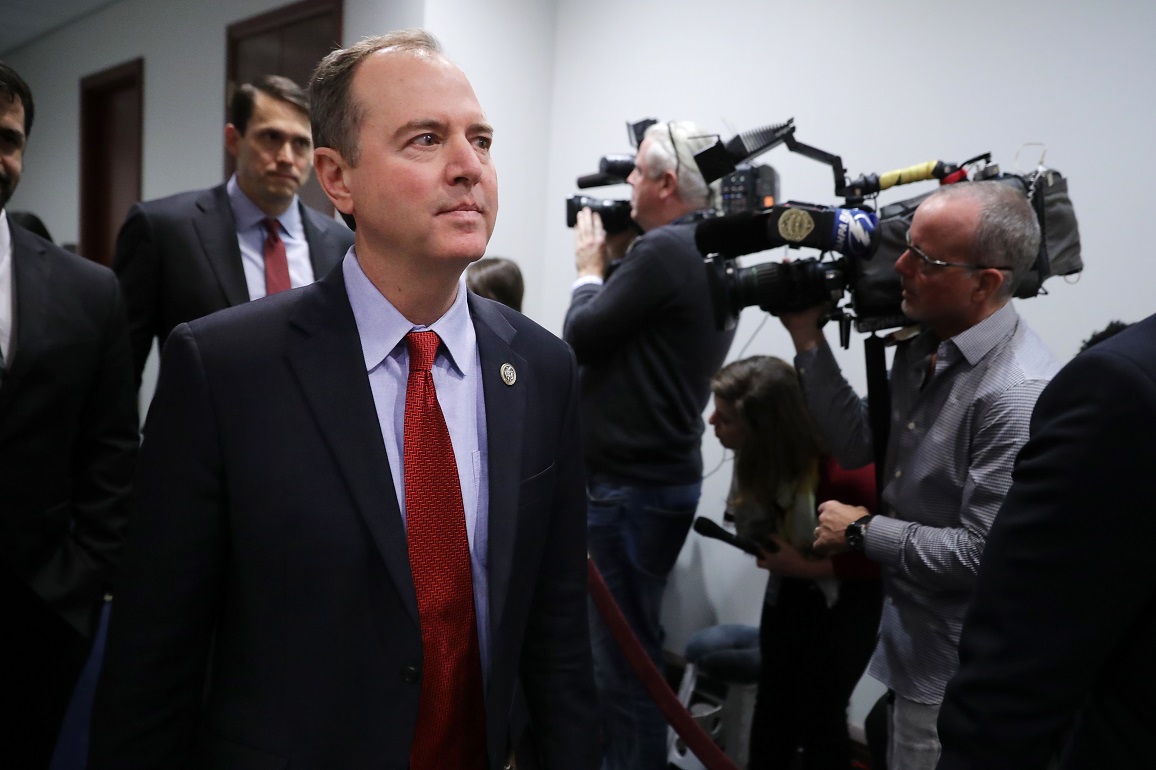 Rep. Adam Schiff (D-Calif.), chairman of the U.S. House Permanent Select Committee on Intelligence, announced Feb. 6 that his committee would be expanding its probe into the Trump administration.

The new investigations would explore whether “any foreign actor has sought to compromise or holds leverage, financial or otherwise, over Donald Trump, his family, his business, or his associates,” Schiff said in a statement.

“The American people have a right to know—indeed, a need to know—that the president is acting on their behalf and not for some pecuniary or other reason. That pertains to any credible allegations of leverage by the Russians or the Saudis or anyone else,” Schiff said, according to CBS.

“Credible?” As in “credible” allegations against Supreme Court Justice Brett Kavanaugh? If the basis for launching criminal investigations was mere gossip and innuendo, everyone in Washington would be under investigation in perpetuity.

But Schiff has other reasons to pursue endless investigations of the Trump administration.

As the country learns more about what transpired in 2016, it appears the collusion with the Russians involved Democrats, not the Trump administration. It also appears that House Democrats are launching investigations against the Trump administration to deflect media attention away from their own culpability in criminal acts, possibly up to and including treason, which could carry penalties of removal from office, fines exceeding $10,000, jail time, and even the death penalty.

Mueller’s latest indictment—that of Roger Stone—suggests there was no collusion, stating, “After the July 22, 2016 release of stolen DNC emails by Organization 1 [WikiLeaks], a senior Trump Campaign official was directed to contact STONE about any additional releases and what other damaging information Organization 1 had regarding the Clinton Campaign.”

If Russia was behind the release of the emails and the Trump campaign was colluding with the Russians, there would have been no need to ask Stone if there was any more information to be disclosed—the campaign would have already known.

Even the left-leaning New York Times and Washington Post acknowledge that it was the campaign of Clinton and the Democratic National Committee (DNC) that paid for the Steele Dossier—the document use to justify illegal wiretaps against the Trump campaign.

And, there is a paper trail of collusion and networks involving Clinton and Russia.

“A donor to the Clinton Foundation, Russian oligarch Viktor Vekselberg, led the Russian side of the effort.

“The evidence shows the Clintons financially benefited from Russia—personally and inside their charity—at the same time they were involved in U.S. government actions that rewarded Moscow and increased U.S. security risks.”

But there is more for the political establishment to be concerned about than just Democratic Party links to Russia.

We also know that former FBI agents Peter Strzok and Lisa Page texted each other saying “we’ll stop it” and about an “insurance policy” in case President Donald Trump won the election. It’s notable that in closed testimony before the House Intel Committee, Page said the messages “mean exactly what they say,” an effort to prevent Trump from taking office or efforts to unseat a duly-elected president.

We also know that in the summer of 2016, Steele’s firm “Orbis Business Intelligence, was retained by Fusion” GPS, during which time, Steele “produced 16 memos, with the last memo dated Oct. 20, 2016,” as reported by The Epoch Times.

One “final memo that Steele wrote on Dec. 13 at the request of [late] Sen. John McCain (R-Ariz.)” was given, along with the rest of the memos, to BuzzFeed by former McCain associate David Kramer, who also advised McCain to give a copy to former FBI director James Comey. Kramer later “invoked his Fifth Amendment right to not testify to Congress in connection to his role in distribution of the fake Russia dossier to the FBI.”

Objective analysis shows there was much collusion taking place, but it was done in a failed (and illegal) attempt to prevent Trump from winning the election and serving his full term as president.

This entire fantasy was fabricated by elites in the Washington political class who had a vested interest in Trump not becoming president.

“Trump’s campaign was seen as an opportunistic wedge in the election process,” wrote Jeff Carlson for The Epoch Times. “At the same time, and particularly as the viability of his candidacy increased, Trump was seen as an existential threat to the established political system.”

And not only have all efforts to remove him failed, there are multiple investigations into those who orchestrated this charade.

The Department of Justice’s Office of the Inspector General has announced that investigations into the handling of the Clinton email probe and efforts against Trump in 2016 have been the subjects of ongoing investigations. Also, the U.S. attorney in Utah, John Huber, was tapped by former Attorney General Jeff Sessions to lead an investigation into similar issues.

Deputy Attorney General Rod Rosenstein recommended the firing of Comey, which was the basis for the appointment of special counsel Robert Mueller. The Mueller investigation itself seems nothing more than a ruse to try and tie the hands of Trump and to hang a cloud of suspicion over his head, which mobilizes the Democratic Party and sways public opinion.

With expectations that the Mueller investigation is coming to an end (and no evidence of collusion), it’s imperative that bad actors keep attention away from them and on the president, which is why we’re now seeing new investigations from not only the Southern District of New York, but also the House Intel committee.

Rep. Schiff’s histrionics amount to a public relations stunt, designed to further mislead his base.