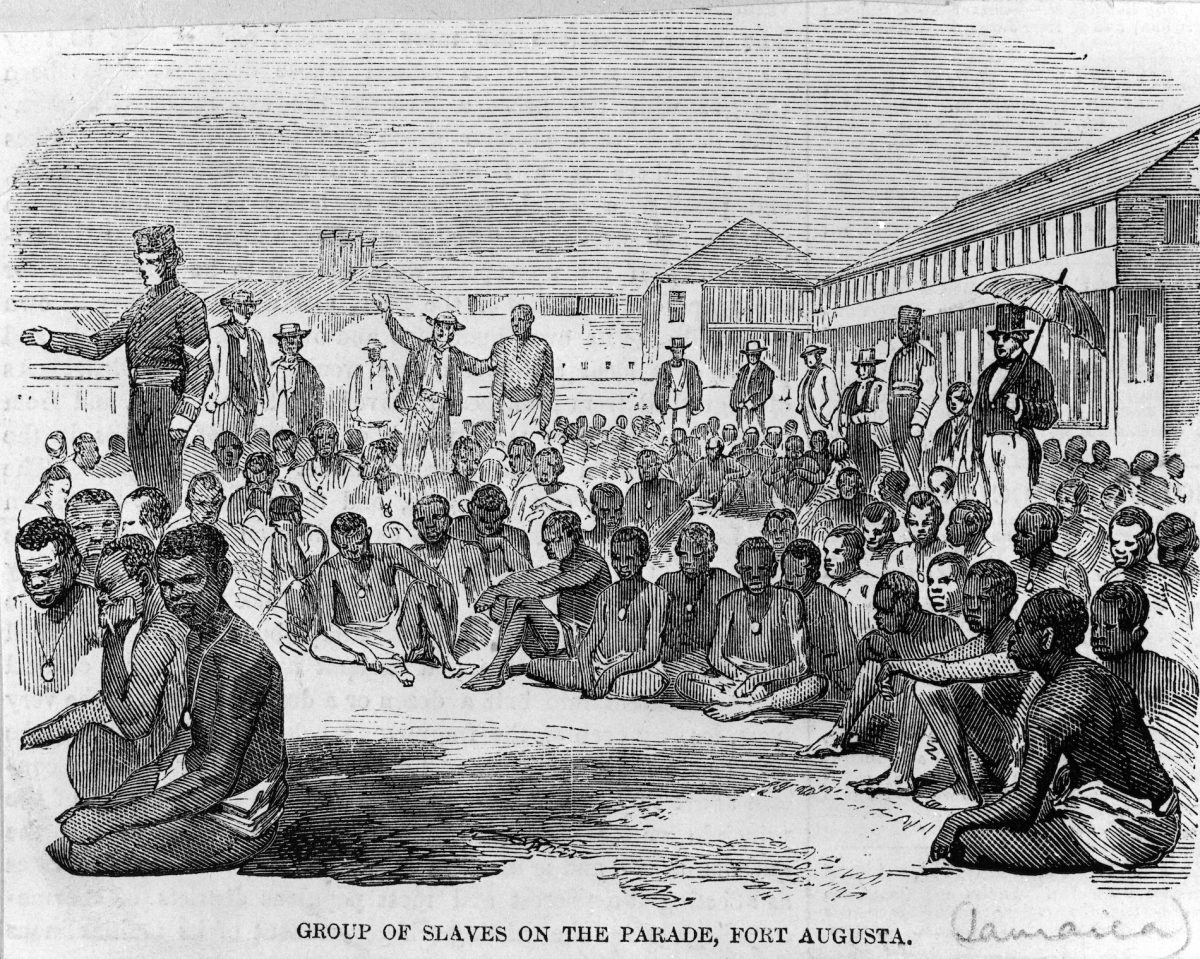 “My roots go back, within my lifetime, to my paternal grandmother Miss Chrishy (née Christiana Brown, descendant of Hamilton Brown who is on record as plantation and slave owner and founder of Brown’s Town).”

These are heavy words to see written by the father of Senator Kamala Harris (D-Calif), a woman who is running for president of the United States on a platform that includes reparations for slavery.

Also interesting is a detailed account by a witness of what happened to slaves owned by Harris’s family:

“At the command of the overseer he proceeded to strip off part of his clothes, and laid himself flat on his belly, his back and buttocks being uncovered. One of the drivers then commenced flogging him with the cart whip. This whip is about ten feet long, with a short stout handle, and is an instrument of terrible power. It is whirled by the operator round his head, and then brought down with a rapid motion of the arm upon the recumbent victim, causing the blood to spring at every stroke. When I saw this spectacle now for the first time exhibited before my own eyes, with all its revolting accompaniments, and saw the degraded and mangled victim writhing and groaning under the infliction, I felt horror-struck. I trembled and turned sick; but being determined to see the whole to an end, I kept my station at the window. The sufferer, writhing like a wounded worm, every time the lash cut across his body, cried out, ‘Lord! Lord! Lord!’”

But, since she’s made atonement for past sins a current policy platform, perhaps she should lead by example and be the first among us to take responsibility; do what she’s asking much of the rest of the country to do and pay dearly for past transgressions.

The thorny issue of reparations for slavery is pernicious.

The progressive narrative of slavery paints in broad strokes and taps into centuries-old pain and angst by methodically re-crafting historical fact into widely imbued myth. It emphatically and falsely supposes the notion that America as a whole and white southerners in particular are to blame for slavery in the United States.

“We must confront the dark history of slavery and government-sanctioned discrimination in this country that has had many consequences, including undermining the ability of black families to build wealth in America for generations,” Senator Elizabeth Warren (D-Mass.)told The New York Times.

Rhetoric like “government-sanctioned discrimination” suggests the entire government had culpability. It’s a distorted view of the past shared by many on the political left, including Harris.

“America has a history of 200 years of slavery. We had Jim Crow. We had legal segregation in America for a very long time,” Harris said on the radio show The Breakfast Club. “We have got to recognize, back to that earlier point, people aren’t starting out on the same base in terms of their ability to succeed and so we have got to recognize that and give people a lift up,” as she openly declared her support for reparations.

The language used in discussing reparations is wildly inaccurate, as it implies liability for slavery rests with the entire country.

“America is not to blame, and the South is not exclusively to blame. Some Americans perpetrated these crimes and other Americans stopped them,” wrote scholar Dinesh D’Souza in his book “Death of a Nation: Plantation Politics and the Making of the Democratic Party.” “Progressive Democrats are in fact the inventors of racism and white supremacy, and the Republican Party fought them all the way,” he wrote.

As of 1860, only 5 percent of southern whites owned slaves and not a single Republican owned a slave. The “slavery debate was between the pro-slavery Democratic Party and the antislavery Republican Party,” wrote D’Souza.

It was Democrats that founded the Ku Klux Klan, shortly after emancipation. Civil War Confederate general Nathan Bedford Forrest was made the first Grand Wizard of the KKK in 1868 at the Democratic National Convention, where the slogan was ‘This is a White Man’s Country, Let White Men Rule.”

Although the violence of the Klan slightly tapered early in the 20th century, there was a revival after Democrat President Woodrow Wilson held a White House screening of D.W. Griffith’s film “Birth of a Nation,” considered the white supremacist magnum opus.

And, despite all of this, there are tangential conditions said to result from slavery that are affecting the black community in America.

The New York Times reported, “Even among the 2020 Democrats who stopped short of endorsing reparations, several have laid out robust policies aimed at closing the gap in wealth between black and white families,” noting that “black families in America today earn just $57.30 for every $100 in income earned by white families, according to the Census Bureau’s Current Population Survey. For every $100 in white family wealth, black families hold just $5.04.”

Disparities like these are often cited as resulting from the “legacy of slavery and Jim Crow.” But, this contention doesn’t withstand scrutiny.

“If we wanted to be serious about evidence, we might compare where blacks stood a hundred years after the end of slavery with where they stood after 30 years of the liberal welfare state,” said Thomas Sowellin an essayentitled A Legacy of Liberalism.

Pew Research data shows that the black/white income and wealth gaps were actually better in 1967 than they are today. So, how is it that the further away from slavery and Jim Crow we get—as the country becomes less racist—the worse these metrics become?

“Despite the grand myth that black economic progress began or accelerated with the passage of the civil rights laws and ‘war on poverty’ programs of the 1960s, the cold fact is that the poverty rate among blacks fell from 87 percent in 1940 to 47 percent by 1960. This was before any of those programs began.

“Ending the Jim Crow laws was a landmark achievement. But, despite the great proliferation of black political and other ‘leaders’ that resulted from the laws and policies of the 1960s, nothing comparable happened economically. And there were serious retrogressions socially.

“The murder rate among blacks in 1960 was one-half of what it became 20 years later, after a legacy of liberals’ law enforcement policies. Public housing projects in the first half of the 20th century were clean, safe places, where people slept outside on hot summer nights, when they were too poor to afford air conditioning. That was before admissions standards for public housing projects were lowered or abandoned, in the euphoria of liberal non-judgmental notions. And it was before the toxic message of victimhood was spread by liberals.

“If we are to go by evidence of social retrogression, liberals have wreaked more havoc on blacks than the supposed ‘legacy of slavery’ they talk about.”

There are calls for an open dialogue on race. Neither Republicans nor Democrats can have a conversation about race by mindlessly reciting tall tales. We cannot allow physical shackles to be replaced by mental shackles that hold us in bondage.

Slavery isn’t an exclusively American phenomenon. It has existed worldwide for thousands of years.

“And what we’re looking at is if slavery is something that happened to one race of people in one country, when in fact the spread of it was around the world,” said Sowell in a television interview. “If you’re going to have reparations for slavery, it’s going to be the greatest transfer of wealth back and forth.”

Sowell said, “The number of whites, for example, who were enslaved in North Africa by the Barbary pirates exceeded the number of Africans enslaved in the United States and in the American colonies before that, put together. Here we have intellectuals who can imagine a different history from the rest of the world, even though it’s so similar to the rest of the world.”

The American intelligentsia also seem to imagine that white Americans and both political parties contributed equally to slavery and policies that have negatively impacted the black community. As demonstrated throughout history, nothing could be further from the truth.

Democrats have yet to apologize for their racist history and accept responsibility for the liberal policies that plague our communities to this very day; progressive policies they’ve cleverly masked as “the legacy of slavery and Jim Crow.”

So, if we are making a principled argument for the payment of reparations, based on the binary legacies of American slavery and Jim Crow laws, then let’s have all payments come from those most responsible—Democrats.

(This article appeared in The Epoch Times)

0 comments on “Reparations for Slavery: Why Only Democrats Should Pay”