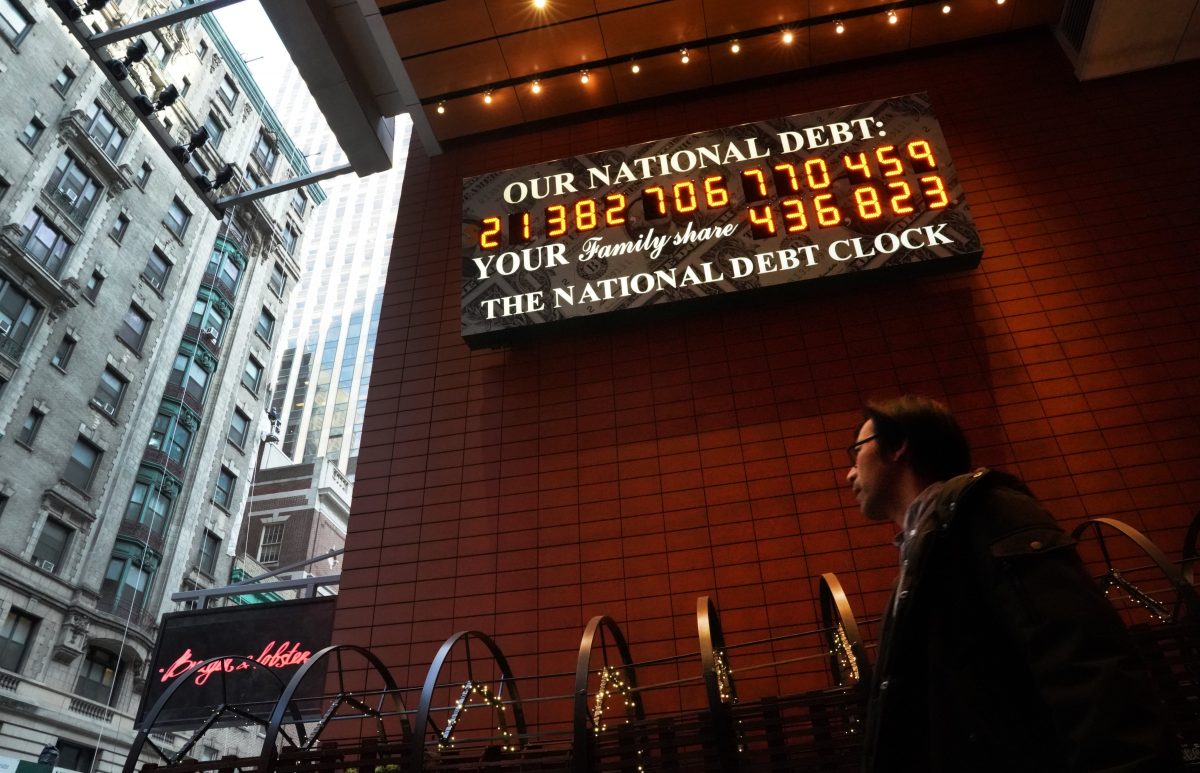 The White House just rolled out an ambitious budget resolution aimed to cut government spending, reduce deficits by nearly $3 trillion, and balance the budget in 15 years.

“My 2020 budget builds on the tremendous progress we have made and provides a clear roadmap for the Congress to bring federal spending and debt under control,” President Donald Trump said in the resolution. “We must protect future generations from Washington’s habitual deficit spending.”

Republicans and Democrats have largely steered clear of proposing sweeping changes to address U.S. national debt because much of it is tied to the political landmines of Social Security and Medicare—projected to run an $82 trillion deficit within 30 years.

Politicians treat budget reform like a game of hot potato.

The last time the United States had a budget surplus was under Republican President Dwight D. Eisenhower. Some argue that in 1998, the administration of President Bill Clinton achieved a balanced budget and ran a surplus, which is incorrect. President Clinton simply used accounting sleight of hand, paying down public debt by borrowing more from intragovernmental holdings. The total national debt increased in fiscal years 1997 through 2001.

What is important to remember is that this isn’t a right versus left issue. The long-term stability and solvency of our nation depend on devising a workable solution that returns the United States to a path of fiscal responsibility and long-term financial sustainability.

I made a video that went viral and lists some of the most egregious examples of wasteful federal spending I could find, which include: $25 billion dollars per year maintaining unused or vacant federal properties, $123 billion per year on federal programs that don’t work, millions of dollars helping Chinese prostitutes drink less, $60 billion in health care fraud, $7.8 billion missing in “foreign aid,” and billions of dollars in new jets that the Pentagon said it didn’t want.

The full list accounted for more than $449 billion in wasteful federal government spending and included money spent on strip clubs and prostitutes. Clearly, within the budget, there are some holes that need to be plugged.

It’s known that federal agencies ramp up spending at the end of every fiscal year to try to avoid getting their budget reduced the following year. Fiscal year 2018 was no exception. Our government officials were out popping bottles and spared no expense.

According to government watchdog Open the Books, in September 2018, the federal government spent more than $300,000 on alcohol, $1.7 million on musical instruments, $673,000 on golf carts, $4.6 million on lobster tail and crab, $7.7 million on iPhones and iPads, and $9.8 million on workout and recreation equipment.

As a side note: To all those who oppose funding a wall on our southern border, in just the final month of fiscal year 2018, the government blew through $97 billion. Don’t tell me we can’t fund the wall.

Among additional measures, Trump’s “A Budget For a Better America” suggests “optimizing the Federal real property portfolio,” an acquisition modernization plan, IT cost transparency, “preventing improper payments that result in a monetary loss,” and allowing “the government to leverage its buying power and reduce unnecessary, expensive duplication,” which has already “avoided $17 billion in costs.”

It’s also laid out achievements in budget cuts by the Trump administration. Regulatory cuts have reduced costs by $33 billion. The Department of Health and Human Services cut $8.2 billion in regulatory costs. The Council of Economic Advisers estimates that deregulation of health care will provide a $250 billion benefit over 10 years.

The president may be a Washington outsider, but it’s going to take a commitment by Congress and seasoned political stakeholders to break the Washington political class of its addiction to spending.

Additional steps toward spending cuts and accountability must become the norm, rather than the exception. The frivolous spending items listed above are indicative of a culture that has grown accustomed to having no limits to waste and pork (and ribeye steak, top sirloin steak, flank steak, snow crab, Alaskan king crab, and lobster tail).

Our government should, spend more time figuring out how to pay for grandma’s Medicare, and spend less money on lap dances and tubas.

(This article appeared in The Epoch Times: https://www.theepochtimes.com/dear-us-government-stop-spending-money-on-lap-dances-and-tubas_2836207.html)

0 comments on “Dear US Government: Stop Spending Money on Lap Dances and Tubas”