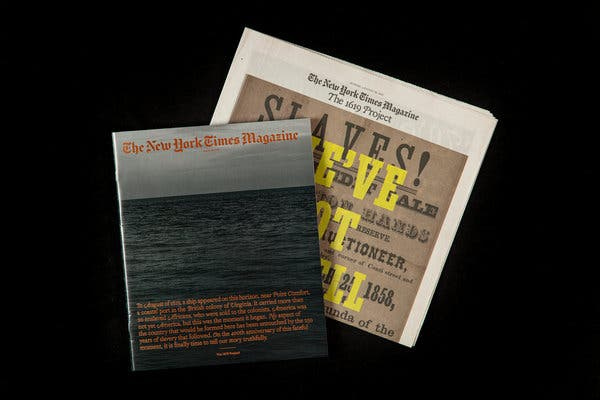 The New York Times recently launched the “1619 Project”—an initiative that, by the paper’s own admission, “aims to reframe the country’s history, understanding 1619 as our true founding, and placing the consequences of slavery and the contributions of black Americans at the very center of the story we tell ourselves about who we are.”

But, this project seems more like an attempt to reshape the public’s view of U.S. history to inflame racial tensions by mischaracterizing the country as inexorably tied to slavery and irredeemably racist, and tying the ills and anxieties of the present to events that occurred roughly 400 years ago.

Let’s start with their primary foray into revisionism. The paper asserts that the year 1619 was when slavery first started. Yet, as Lyman Stone wrote for The Federalist, “Spanish colonies and forts in today’s Florida, Georgia, and South Carolina had enslaved Africans throughout the mid-to-late 1500s: in fact, a slave rebellion in 1526 helped end the Spanish attempt at settling South Carolina.

“Slavery in America did not begin in 1619. It began in 1513,” he wrote. “Any argument for a 1619 date implicitly suggests that the American project is an inherently Anglo project: that other regions, like Texas, California, Louisiana, and Puerto Rico, have subordinate histories that aren’t really, truly, equal as American origin stories.”

The framing of slavery as a uniquely American (or a white versus black) phenomenon is counterfactual and intellectually dishonest, as slavery occurred all around the globe. It was America that played a large role in ending slavery and casting it as an unacceptable practice.

It’s no coincidence that the Times’ series of essays launched at almost the exact same time that Executive Editor Dean Baquet revealed in a town hall meeting the paper’s pivot from its obsessive coverage of the Russian collusion conspiracy theory to its focus on race.

A transcript of the town hall meeting (which was never supposed to be public) is revealing.

“The day Bob Mueller walked off that witness stand, two things happened. Our readers who want Donald Trump to go away suddenly thought, ‘Holy [expletive], Bob Mueller is not going to do it.’ And Donald Trump got a little emboldened politically, I think,” he said. “Because, you know, for obvious reasons. And I think that the story changed.”

Baquet said, “We built our newsroom to cover one story, and we did it truly well. Now, we have to regroup, and shift resources and emphasis to take on a different story,” which is a “story about what it means to be an American in 2019.”

But, their view of American identity is focused solely on race and attempts to define the United States as permanently tarnished by events that happened hundreds of years ago:

Many of the town hall questions from Times staffers to Baquet were about alleged racism and how the paper could continue to push this narrative vis-a-vis the Trump administration.

Responding to a staffer, he said that the only reason he didn’t want to use the word “racist” in their coverage was because it quickly loses its power and the “best way to capture a remark, like the kinds of remarks the president makes, is to use them, to lay it out in perspective. That is much more powerful than the use of a word.”

So, the Times would rather have reporters shape their stories to contextualize anything they can through the lens of racism because it’s the most effective tool they have at achieving their ultimate goal: casting him as a racist. That approach is opining, not reporting.

It was the act of skewing information by coloring it with their own bias that set most liberal media outlets—including the Times—at odds with the truth during the entire Russian collusion fiasco. They willingly chose not to present the public with all of the facts and they shaped a narrative that suggested the president actually conspired with a foreign government, when the outcome of the investigation showed otherwise.

The Mueller investigation was a dud, and now, liberal news organizations are pivoting to a focus on race in an attempt to malign the Trump administration, in hopes of delivering the outcome the Mueller report didn’t: removing Trump from office in 2020.

As Republicans move to further court the black vote, Democrats will say and do anything to keep African Americans from jumping ship. This latest effort by the Times, the 1619 Project, is part of that strategy. It’s reshaping American history for political purposes and keeping the black community looking backward, rather than forward.

The African slave trade began around the year 1501. But, did any of that define what we now call America?

The first permanent English settlement in Jamestown, Virginia, was established in 1607. And even though slaves from Angola didn’t arrive there until 1619, the Times simply doesn’t consider its establishment 12 years before as relevant to the discussion of the founding of America.

The American Revolution began in 1775 with the battles of Lexington and Concord, a conflict that would result in the actual creation of the United States. But, this historically accurate, objective fact isn’t too important for the Times.

But, pesky little things like facts don’t matter when your real goal is activism and revising history to push your own political agenda.

(This article was published at The Epoch Times: https://www.theepochtimes.com/race-revisionism-and-the-new-york-times_3060117.html)

0 comments on “Race, Revisionism, and The New York Times”