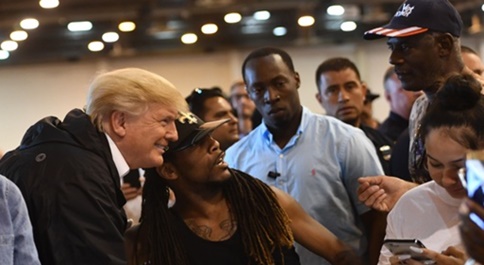 It’s interesting to watch people falling over themselves lauding Rasmussen’s latest polling data that shows black support for President Donald Trump at 34 percent, because I’m old enough to remember last fall, when that number was actually at 36 percent.

This poll has a margin of sampling error of plus or minus 2.5 percentage points, which basically means black support for the president hasn’t changed over the past year.

But, to contextualize that, it’s important to remember that when Trump took office, his favorability among black Americans was only at 8 percent. So, sure, there was a meteoric rise in support over a two-year span. But, clearly, that trend has abated.

The two questions everyone should be asking are: 1) What caused this groundswell of support to cease, and 2) given the abysmal failure of Democrats, why isn’t black support even higher?

In November, the Trump 2020 campaign launched “Black Voices for Trump,” an outreach effort dedicated to “recruiting and activating Black Americans in support of President Trump.”

As I’ve held discussions with black people throughout the country who don’t like this administration, they’ve shared with me what they need to see to consider backing the president.

Based on that, the campaign and this initiative should consider several things to establish within the black community that this effort is in good faith and not simply a campaign stunt.

The Cessation of Black Pain

As an overriding principle, for Trump to reach black Americans who don’t already support him (or who are at least “Trump-curious”), the campaign must have messaging and actions that signal it’s serious about the cessation of black pain. Its overtures to the black community must come from a place of genuine concern.

You can’t talk at people and expect them to support you in large numbers. You have to have conversations with them, hear and understand their concerns, and show them that you’re a co-equal partner seeking to operate in their best interests.

This means actually going into black communities and discussing with black people their concerns.

Black people from the East Coast to Oakland, California, often say they never see Republicans in their neighborhoods. They say the GOP doesn’t knock on black doors and that they don’t do real black outreach. And when they see zero effort from the GOP in black communities, they look with suspicion at Republicans who say they want to “help.”

People will only support you in large numbers if they believe you actually care about their issues and circumstances. You establish that trust by forming relationships, which requires interaction.

Simply shouting platitudes from a television screen or social media platform isn’t enough. While those things are needed, they must be combined with face-to-face interactions, particularly in light of the horrific lies the mainstream media has spread about the Trump administration over the past three years.

Focus on the Future, Not the Past

For several years, we’ve heard from many political influencers (myself included) about the sordid history of the Democratic Party—the party of slavery and Jim Crow; the party that largely voted against the 13th, 14th, and 15th Amendments to the Constitution; the party that founded and maintained the Ku Klux Klan; and the party that brought us former President Lyndon Baines Johnson and the “war on poverty” that was a strong contributing factor to the debilitating conditions that plague communities to this day.

But, talking about the failure of the opposition means nothing if you’re not offering solutions (more on this shortly). It certainly doesn’t address the question of “What have you done for me lately?”

And although the Trump administration has made the black community a priority, the GOP has not. African Americans across America know this and, trust me, they resent it.

This needs to be overcome.

Discussing the president’s contributions to historically black colleges and universities (HBCUs), a 400 percent increase in black business ownership under his administration, urban revitalization, etc., are great points and absolutely should be reiterated. But, a core focus should be on what happens from here and how that change will be measurable.

It would behoove the campaign to convey a sense of optimism about the future of the black community under the leadership of the president.

Many also want to see the campaign focused on real policies. Signing criminal justice reform was a substantial policy achievement for the administration, and difficult for haters to assail. But continuing to state talking points like “black unemployment is at an all-time low” seems to resonate only with people who already support the president (on that issue specifically, because his detractors are well aware that the downward trend really did begin during the Obama administration and they’re happy to remind you of that within about three seconds).

Arguably, the largest effort aimed to improve the lives of black Americans is the president’s urban revitalization initiative: the Opportunity and Revitalization Council. This was announced in December 2018 and people are now asking what’s been done. Where are the new buildings, fresh coats of paint, new business licenses, and blocks in urban areas that have been or are being rehabilitated?

They want results, and the campaign needs to deliver proof of results. Otherwise, the effort simply looks like what politicians for decades have promised and failed to deliver.

African Americans that can be swayed, but who currently dislike the president, care about real solutions to real problems. For that reason, it will be beneficial for the campaign to discuss how the Trump administration will address issues such as school choice and charter schools, more jobs in urban communities, reducing crime, affordable housing, closing the income and wealth gaps, etc.

(Note: If you underestimate the importance of this point, please consider the group of protesters who just shouted down progressive presidential candidate Sen. Elizabeth Warren (D-Mass.) in the progressive city of Atlanta, demanding to be heard on education policy.)

Creating a squad of supporters and social media influencers who simply recite the same talking points we’ve used for two years can easily look like pandering and won’t likely be well-received by the people the campaign is courting.

It’s clear to supporters that the Trump administration really does want to solve the problems that have affected black communities for decades. But it needs to adapt to cut through the noise and the lies of those on the political left who wish to see the current administration fail.

Then, and only then, will there be another massive gain in support among black Americans.