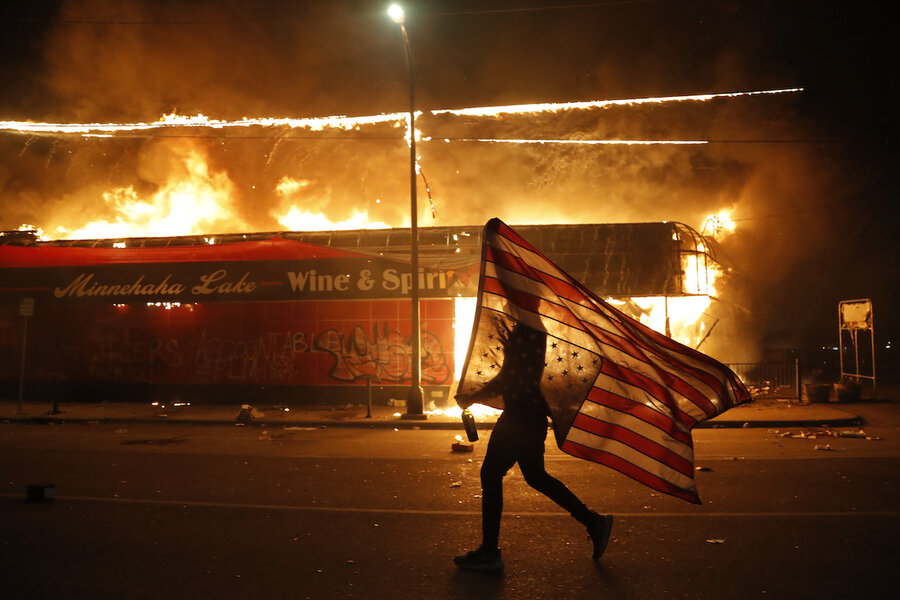 This George Floyd tragedy illustrates the difference between seeing vs. opening your eyes, between hearing vs. listening, and between staying engaged vs. paying attention.

I know the other officers saw their colleague with a knee in Mr. Floyd’s back…but why didn’t they open their eyes? Surely, a man in cuffs who is no longer a threat doesn’t need a knee on his neck anymore. Don’t tell me he was still a threat; anyone who is still a threat cannot be kept on the ground in such a lackadaisical manner.

There’s a squad car right there as well. Why not utilize it? There’s another officer standing two feet away-if the situation is still threatening, why isn’t he needed? No, I don’t have all the facts, and no, I don’t care. These other officers had a duty to simply open their eyes and realize that the display of force being used wasn’t necessary.

I have no doubt all officers heard Mr. Floyd say he couldn’t breathe…but why weren’t they listening? Does that sound like a man who is trying to provoke someone or initiate an attack, or does it sound like someone who legitimately is struggling with breathing? Why is the officer using his knee to choke the life out of someone not more concerned in engaging Mr. Floyd in conversation about his breathing?

Why did the other officers not intervene to at least ask the main officer to reconsider his knee position or why Mr. Floyd stopped talking at a certain point? Their duty is to protect the general public-that means everyone, even a suspect. If that means second guessing a fellow officer, then guess what…do your job.

The other officers stayed engaged-with the crowd, with medical personnel, with each other to an extent…but why weren’t they paying attention? Common sense would at the very least make you question Mr. Floyd’s welfare at a certain point. I’m not interested in calling anyone out individually, but no, this is not an appropriate showing of force.

I do acknowledge that the police have an extremely difficult job, and sometimes decisions that we later second guess happen in a split second…but this is NOT that situation. This happened over minutes. I’ve taken lunch breaks shorter than this. To objectively understand these cases, you have to put yourself in the position of both the officer and the suspect before deciding not what was appropriate, but whether you understand the rationale of that person. I don’t agree with the use of deadly force in some of the other cases that have been publicized, but in some, I can understand why the officer felt their life was in danger and with a few seconds to act, chose to shoot.

Nevertheless, I cannot for the life of me understand the thought process of any of the officers in this case. “I trusted my colleague,” “I wasn’t paying attention,” or “I wasn’t the one using force to determine what was appropriate” simply isn’t good enough for the officers standing by. For the officer using force, there simply aren’t words. Not meaningful ones anyway. Not ones to even attempt to justify his actions outside of some crazed combination of hate, incompetence, laziness, and wrongfully misplaced empowerment.

This is murder. Not at the slip of a trigger finger because a woman felt undersized, not because someone was exhibiting erratic behavior and was armed with a knife, not because someone was attempting to escape in a vehicle that could become a deadly weapon. I am not condoning the acts of the police in these other cases, I’m simply saying that right, wrong, or indifferent, this behavior falls into another category that’s even worse in this case in my opinion.

These officers had all the time in the world to consider their options, evaluate the risks, and ensure that everyone- Mr. Floyd, themselves, and the public-all went home safe. They failed to meet their obligations.

To compound the tragedy, it is no secret that trust is earned, not given, and that trust between law enforcement and the general public, particularly communities of color, is already fragile. One needn’t delve very far into history to understand why; the prevalence of questionable law enforcement tactics has changed with technology.

Confrontations are now captured on video in high definition for the world to see, rather than simply being encapsulated in the sentencing guidelines for suburb cocaine vs. inner city crack or in the statistics that detail the correlation of a stop and frisk based on the color of your skin.

No matter what happens to these four police officers, the true effects of this situation have not yet been realized. Across the country, there will be individuals who will now resist arrest, maybe rightfully and maybe wrongfully, because their trust in our justice system just took a fatal blow. Because their trust is subject to a fatal blow that could lead to their noncompliance, they may very well be the victim of a fatal blow as well. This is the disheartening, inevitable reality…I hope I’m wrong, and that trust can be rebuilt before there is any more unnecessary loss of life.

I always have and still do maintain that the majority of law enforcement officials are honest, hard-working, good people, but these incidents are happening way too frequently.

Without accountability, nothing changes, so yes, perhaps more thorough training would be beneficial in some of these cases, but in this case, nothing less than life in prison will atone for the conduct exhibited in that ten minutes.

Andrew Kramer is an Arizona-based attorney.